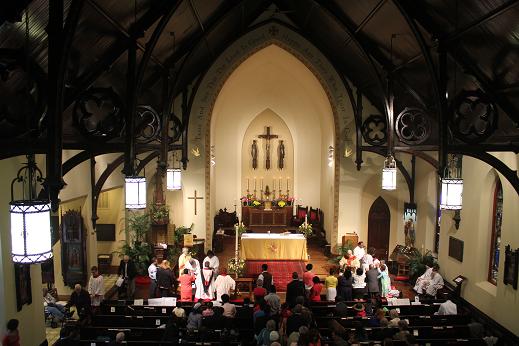 (Please scroll down for Spanish translation)

Grace Church is a diverse congregation committed to a common life sustained by Worship.

We bear witness to God’s love in Christ through our life together and our Service to the wider community.

Within any family, each member has a role to play and each member shares the responsibilities of keeping the family going.  As Paul said to the Corinthians, “Now all of you together are Christ’s body, and each one of you is a separate and necessary part of it.” This is true for every member of the Grace Church Family.  There is something for everyone to be part of, and if there is something new that you want to see, there will be an opportunity to bring that forward.

Below is a list of the many vibrant groups at Grace.  If you have an interest in any of these groups, please contact the Church Office at 914-949-2874.

Acolytes. This group of adults and children serve as attendants to the clergy during the service.  Many parents serve alongside their children.  Training is required and anyone from age 7 up may participate.

Altar Guild. This group ensures that the clergy vestments and altar cloths are kept in pristine condition.  They prepare the altar for all services, including weddings and funerals.  They also manage the decoration of the altar, for high holy days such as Easter and Christmas.

Angelus. The Angelus is the church newsletter.  It is published 4 times per year and is also made available by email and on the church’s websites. The Angelus includes articles that are written and contributed by different parishioners.  Any parishioner can submit an article and some are asked specifically to write about a topic they know about.

Bible Study. This group meets weekly to read and discuss themes and books of the Bible.  The class is led by the rector and meets during the “school year” of September through May/June.  During Lent, Bible Study is replaced by a special Lenten series.

Book Club. This group puts a reading list together each season and meets monthly to discuss the book for that month.  The reading list includes books of varied genres and at the end of the season, they have a celebration lunch at a local restaurant for their final discussion.

Caribbean Ministries. This committee has been working on projects to assist Episcopal and Anglican churches and programs in the Caribbean for 25 years. Their largest project is a Feeding Program that provides hot meals to students in several primary schools in Jamaica, West Indies.  They also sponsor a student who attends El Hogar in Honduras.

Choirs.  There are three choirs at Grace Church.  The Senior Choir is made up of parishioners and four section leaders, who are professional singers as well as parishioners. There are also two youth choirs – one which sings during Family Sundays – and the Cherub Choir which sings at special services, including Easter.

Counters. There are four teams who count, record and deposit donations received at the English-speaking services on Sundays. Each week, a different team counts and new members of the Counters Team are always welcome and needed.

Episcopal Church Women. This group unites women in worship, service, gifts and fellowship which deepens and strengthens their own spiritual lives. The ECW has a history of fundraising, from its famous Mardi Gras parties to the Easter Basket raffles. They also have coordinated a coupon drive to help military families make ends meet at the grocery store.

Eucharistic Ministers.  This team of parishioners have been trained and given authority to administer communion to those congregants who can no longer attend regular service (temporarily or permanently).  They visit with these parishioners and help keep their connection to the parish through weekly fellowship.

Friends of Music. This is a committee of parishioners who are dedicated to raising money to support the music program, helping it continue its wonderful ministry throughout the year.

FX3 (families, faith and fellowship). This group of families with young children saw an opportunity to connect better with each other.  They plan activities designed to encourage closer relationships inside and outside of Sunday School and church services.

Knitted in Grace.  A group of parishioners who knit squares and collaborate to make comfort shawls and blankets for the sick/shut-in members of the parish.

Lay Readers. These individuals volunteer to read the lessons and prayers of the people each Sunday morning.

Men of Grace. This intergenerational group of men focuses on individual spiritual development and youth development.  Each year, they award young parishioners an award and inspirational messages of support and encouragement for their future success.  They also coordinate a men’s prayer breakfast with the rector.

Ushers. Teams of four or more parishioners who greet and assist visitors and congregants entering the church, facilitate certain parts of the service (collection, communion), and straighten up the church following the service.

Vestry. This group of parishioners serves as a leadership team to make decisions related to the running of the church.  Responsibilities are divided up into several areas including Building & Grounds, Christian Formation, Growth, Stewardship, etc.  Vestry members are elected at the Annual Meeting in January of every year to 2- or 3-year terms.

Youth Ministry.  These parishioners are responsible for the Christian education of our young people.  The formats are:

Welcoming Committee. This team coordinates the weekly coffee hour schedule and special hospitality events.  Members are on-hand to assist the coffee hour hosts (each week a different family or team hosts coffee hour) and they also manage the supplies.

One of Grace Church’s strengths over the decades has been outreach.  It’s manifested in many ways, from the Servant Ministry, whose members visit our sick and shut in, to the Overseas Mission offerings, which go towards projects beyond our borders.

For over 25 years, the Caribbean Ministries Committee has been one of these outreach programs.  This team is made up of several members who were born in the Caribbean or have some Caribbean ancestry.  But don’t worry, Caribbean heritage is not a requirement of membership!  The main purpose of the committee is to assist churches within the Anglican Dioceses of the West Indies and the Episcopal Dioceses in Honduras, Panama and Belize.

This assistance varies.  Some years, Caribbean Ministries has provided worship materials, altar supplies and clergy vestments.  Since 2012, they have contributed towards a young student’s tuition at El Hogar and in 2013, they made a contribution towards our youth’s summer mission trip to Honduras.  In other years, they have contributed to agricultural efforts, educational needs and scholarships.  The committee does not work alone, organizations like Food for the Poor, New York Altar Guild, CM Almy, Appleton Estates and The Bickford Foundation have been a big help.

The biggest event of the year for Caribbean Ministries is the annual Dinner Cruise from Westchester down to the Statue of Liberty and back up again.  This cruise is routinely sold out every year and everyone has a wonderful time.  One of Caribbean Ministries’ strongest partners is St. Peter’s Church in Peekskill.  St. Peter’s has collaborated with Caribbean Ministries for years on many projects and is a big reason why the dinner cruise is always such a success.  This event marks the end of the committee’s largest fundraiser of the year: a raffle whose proceeds go towards a feeding program in Jamaica.

Supporting the feeding program is the biggest donation that Caribbean Ministries makes.  Recently, the program was able to extend its reach from nine to eleven primary schools.  The schools are part of the Diocese of Jamaica & The Cayman Islands and are operated by St. Barnabas Anglican Church in St. Elizabeth.  Children in these schools receive a hot, nutritious lunch and in many cases this is their best meal of the day.  Over the years, funds donated for the feeding program have helped purchase large storage containers for food, supplies for starting vegetable gardens and supplies for preparing food.  In addition, animals were provided to farmers who partnered with the school feeding program.

There are many more things that Caribbean Ministries has done and will continue to do in the future.  If you are interested in finding out about the committee, you are welcome to attend our monthly meetings which are on the first Sunday of every month.